The Bachelor is one of my guiltiest pleasures. I literally cringe every time I admit to watching it, but I can’t help being sucked in. My mom and sister watch it, too, and for a long time we would have weekly phone conversations about what was happening in the show, dissecting every interaction and making predictions about what would happen. My parents recently moved to the desert also, though, so now we get to watch The Bachelor together, in real time!

Last Monday night, I had my parents over so we could watch the show, and I made this cauliflower crust pizza for us to eat as we watched. It turned out even better than I expected. I mean, I could actually pick up my pizza. It has been a long time since I’ve had pizza that was both good for me and pick-up-able. Chris is picky about his pizza, so I got him a flatbread instead for his crust, but he thought the cauliflower pizza was as good as his flatbread pizza. You better believe I’m going to make this again, and make extra to freeze for the next time we need a really quick meal.

After Monday’s meal, I had a bunch of leftover ingredients that were already cut up, but I was out of cauliflower. I experimented a little and came up with an insanely easy dinner that used up all my leftovers. More than a recipe to follow step-by-step, this is an idea you can use on those “OMG I am so exhausted and we have nothing in the fridge” days. You can easily adapt it to what you like and what you have on hand, or to keep scraps of this and that in the fridge from going to waste. This can be a quick one-dish meal, or it would be great alongside a green salad or veggies. It’s even fast enough that you could make it in the morning, and feel good about eating pizza for breakfast!

Here are my ingredients. You can see this is not an exact science, people. Literally just a bunch of random leftovers. 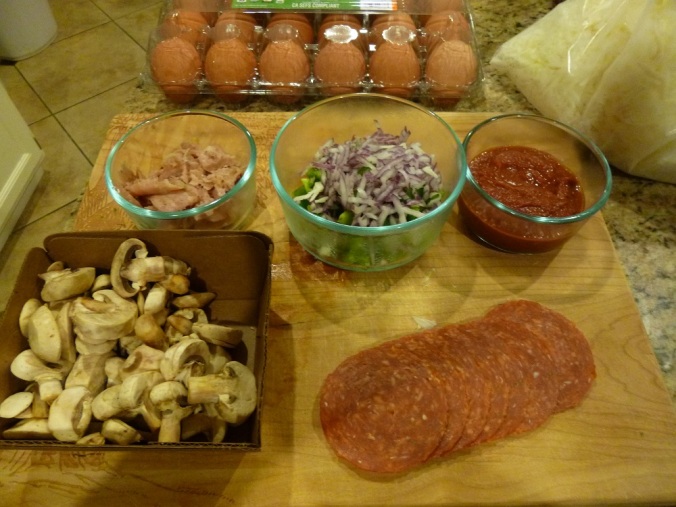 Saute the sausage and veggies.

Going into the oven, and coming out. 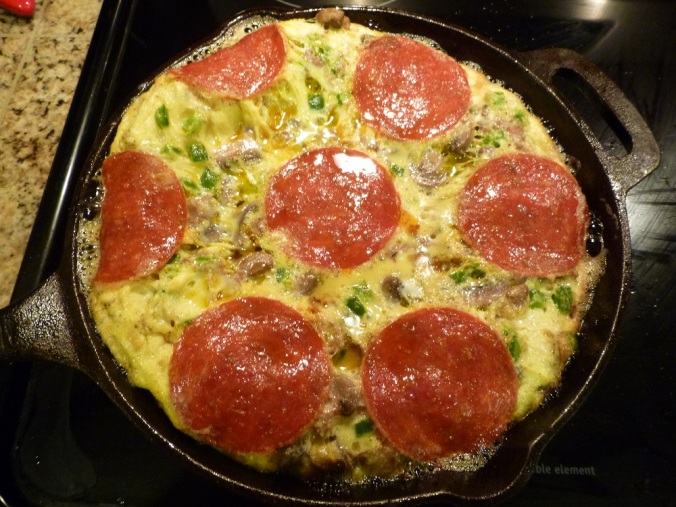 And the finished melty, saucy product. Like a deep-dish pizza with egg instead of a crust. 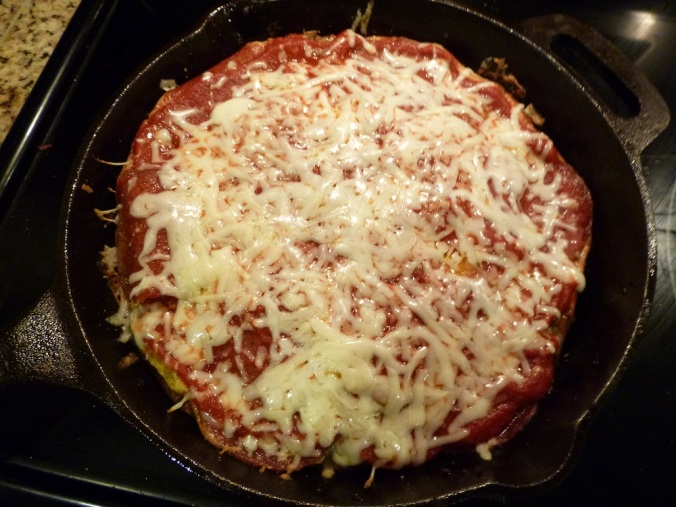 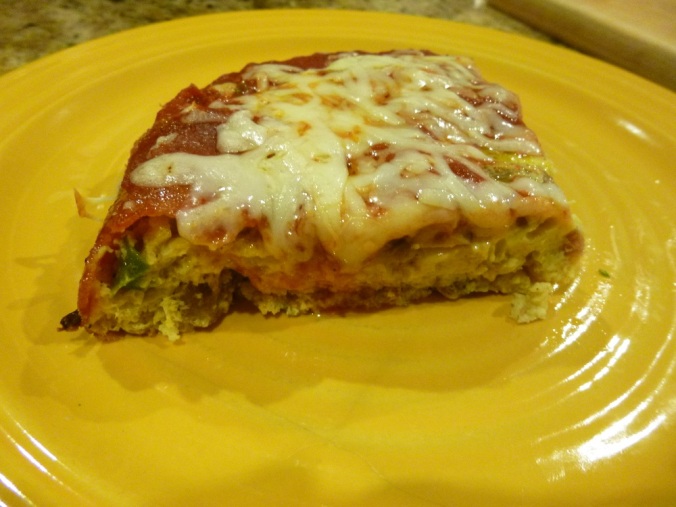 *Check ingredients to make sure these are SCD compliant. You might have to shop around for brands that comply, but they are out there! I use Aidell’s chicken and apple sausage from Costco (it does list a rather vague “spices” on the ingredients, but I say it’s close enough). I can find nitrate-free, uncured pepperoni and pizza sauce that list only SCD-compliant ingredients at Sprout’s, and I feel comfortable using these, but of course if you feel otherwise you can omit, use homemade pizza sauce, or simply add fresh tomato with spices from your own pantry and olive oil to the top instead.

On New Year’s Day, I wanted to make a special breakfast for my honey but I wanted it to be good for me, too, after all the holiday indulgences. I hadn’t planned anything ahead of time so I had to scrounge in the fridge, and I saw that we had a bunch of leftover butternut squash from a risotto Chris had made for a dinner party. A quick Google search led me to this recipe, which I revised a little to make it SCD legal and, um, possible.

You see, I have a problem making paleo pancakes. No matter how many times I try, I can’t get it right. I try high heat, low heat, medium heat, cast iron, non-stick ceramic, lots of oil, a little oil, and I inevitably end up with an infuriating glop of pancake mush or burned little pucks. Even when the people who write the recipes swear that this is the best/easiest/simplest paleo pancake ever. I tried frying this batter and the first attempt had to be rinsed down the drain, so I improvised and decided to bake the rest of the batter instead. And, guess what!? It turned out to be delicious! It was also easier and less messy than frying individual pancakes, making this a perfect addition to a low-key weekend breakfast.

Here is what the pancake looks like coming out of the oven. You can kind of see how the edges are pulling away from the pan. 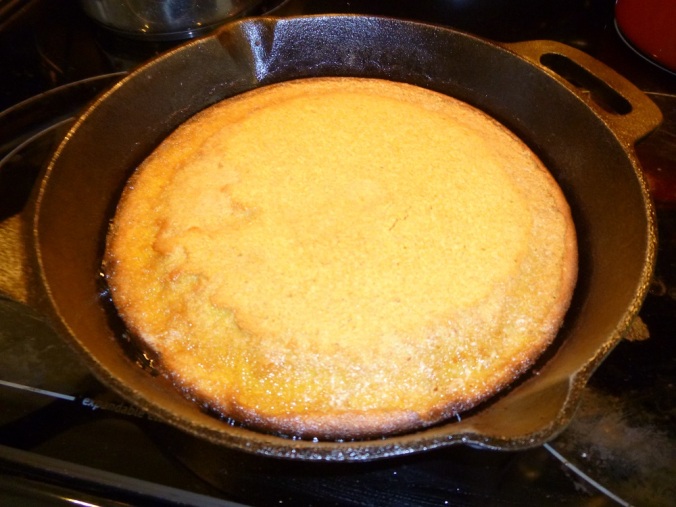 And voila. Breakfast. I ate mine without maple syrup and it was still sweet and moist. 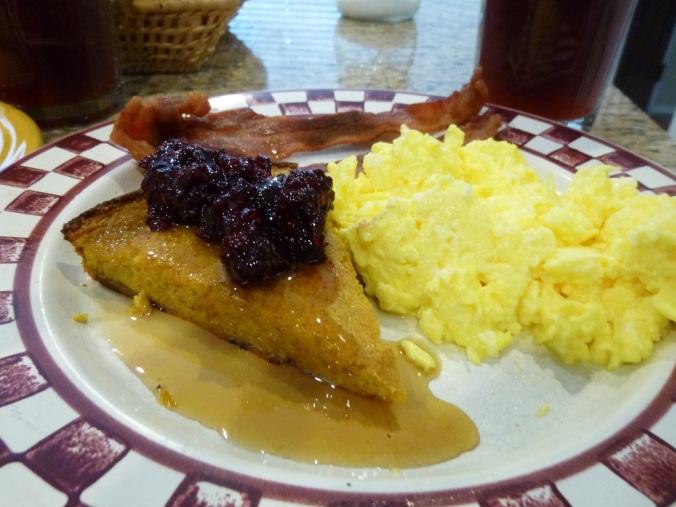